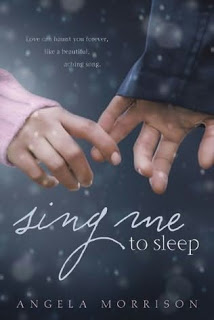 Beth has always been “The Beast”—that’s what everyone at school calls her because of her awkward height, facial scars, and thick glasses. Beth’s only friend is geeky, golden-haired Scott. That is, until she’s selected to be her choir’s soprano soloist, and receives the makeover that will change her life forever.
When Beth’s choir travels to Switzerland, she meets Derek: pale, brooding, totally dreamy. Derek’s untethered passion—for music, and for Beth—leaves her breathless. Because in Derek’s eyes? She’s not The Beast, she’s The Beauty.
When Beth comes home, Scott, her best friend in the world, makes a confession that leaves her completely torn. Should she stand by sweet, steady Scott or follow the dangerous, intense new feelings she has for Derek?
The closer Beth gets to Derek, the further away he seems. Then Beth discovers that Derek’s been hiding a dark secret from her …one that could shatter everything.

I have to be honest. I kept putting off reviewing this book.
Why?
‘Cos it was so emotionally overwhelming.
I was blown away by Taken By Storm and I just had to read Angela Morrison’s sophomore outing. Taken By Storm had dual PoVs — that of Michael and Leesie’s. In Sing Me To Sleep, it’s just Beth – the seventeen year old girl bullied everyday single day of her life. When a certain Meadow and her mom wave their magic wands Beth the Beast transforms to Beth the Beauty and wins the heart of David – star of the Amabile Boy’s Choir (I swear, choir boys have never been hotter!). If you’re thinking Cinderella, think again.
Because…well, you need to read it to find out.
I’m in love with Angela Morrison’s writing. It’s poetic, lyrical and so beautiful. Every word, every phrase, every line touches you. More than a writer, I think she’s a brilliant student of human emotions. She touches upon a lot of aspects of a teen’s life –bullying, friendship, love, loss, self-discovery.
Beth’s lyrics are splattered throughout the book, giving us a deeper glimpse into her mind, making her so much more relatable. I thought the subtle Phantom Of The Opera parallel running alongside added an interesting twist to the story.

I’ll go back to what I said before. Sing Me To Sleep is such a moving story, both luminous and heart-wrenching, it kept me thinking days after and I needed sometime to detach myself from it, before I could write about it. It made me laugh. It made me angry. It made me smile. And it made me bawl my eyes out.

Yes, this is stuff that fantastic YA fiction is made of. Wow.

Sing Me To Sleep comes out on March 4th, 2010 (Rush over to order your copy on Amazon)

And guess, who has a signed ARC? Me! Me! Me! If you want one too (you’ll get the actual copy), as part of Angela Morrison Month, I will be holding a GIVEAWAY of the book soon. So be on the lookout.

7 thoughts on “ANGELA MORRISON MONTH: ReaderBuzz: *Sing Me To Sleep* by Angela Morrison”

Picture Book Alert!
I finished reading British-Ghanaian author Caleb Azumah Nelson’s Open Water in the bath yesterday. A most perfect read.
I always viewed Emily Ratajkowski as one of those exceptionally hot models who thrive by sexualizing their bodies (which is great) but which almost always aligns with the male gaze (which puts the whole thing at odds). In other words, I haven’t really known what to think of her.
This book came to me at a time when I *needed* it. It’s almost magical how coincidences work out. I mean, I saw the title, I knew the book cos I had seen it around, but I didn’t know much. I went into it with a certain expectation, and came out of it with a whole other perspective.