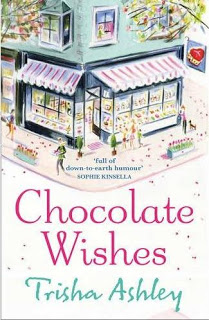 Title: Chocolate Wishes
Author: Trisha Ashley
Life is sweet for chocolate maker Chloe Lyon! Business is booming at her artisan chocolate-makers ‘Chocolate Wishes’ in the picture-perfect Lancashire village of Sticklepond – not least because all of Chloe’s sweet treats contain an inspirational prediction for each customer. If only her own life was as easy to read in the cards, perhaps Chloe could have foreseen being jilted at the altar! But Chloe has long put thoughts of love behind her – after all, life is busy enough, especially as she tries to sort out her friends’ tangled love lives and the village welcomes its new vicar, Raffy Sinclair. However, the village rumour mill goes into overdrive when it is revealed that Raffy is the distinctly unorthodox ex-front man of rock band ‘Mortal Ruin’ – and also happens to be Chloe’s first love, who left her broken-hearted! Whilst Chloe tries to ignore this blast from her past, will she discover that wishes can come true when you least expect it!?
Trisha Ashley’s latest offering Chocolate Wishes can be summed up as Chocolat meets Jane Austen, with dollops of magic and a dash of some oddly endearing characters. Chloe Lyon is a succesful chocolate maker who seems to have quite a few things going on in her life – a mother who’s done a disappearing act, eccentric housemates in the form of a goth brother, a warlock for a grandfather and a gypsy aunt, and two particular ‘blasts from the past’, that if not upset, definitely sends tremors through her otherwise delightfully crazy existence. So, along with the introduction of a sexy, ex-rockstar of a vicar, we have an almost-satanic cult bobbing it’s head in the village of Sticklepond (which also appeared in Trisha Ashley’s ‘A Winter’s Tale’) and together with mistaken paternal identities we have sprinklings of love portions and guardian angels!
Chocolate Wishes might have suffered from too-many-subplots syndrom if Trisha Ashley had not deftly blended in the magical and the mundane. Dialogue is certainly her strong point, for it is through the interactions of the characters that we get to know not just what they are thinking but also how the latest proceedings are affecting the Sticklepond locality, which is (inspite of being a first person narrative with focus on one particular character) an important aspect of the story. Having said that, characters are definitely where Trisha Ashley nails it, for her cast and supporting cast never fail to delight the reader and hold their interest. Some might say that the plot loosens at certain places but considering how I lurrve character-driven books more, that never was a problem with me.
I enjoyed Chocolate Wishes immensely and even if you are the rare anti-chocolate person, I recommend this to you and You and YOU.
Really, go read this. You might be tempted to take a dip in chocolate and live on chocolate for the rest of your life, but honestly, what’s the harm in that? Who cares about getting fat when you can have all the chocolate you want?
(Warning: Delicious recipes inside)

10 thoughts on “Dipped in theobroma: A Chocolate Wishes Review”

Hello, hello! It is the big day of love and what better time to talk about your favorite romance reads of all time than today?! 💞
~ it has been a while ~
#qotd: where do you like to read?
#qotd ✨