I caught a stomach bug and that’s what kept me away from blogging. But I have been lurking and snooping around yours..(did you get a hint?) 🙂

And well, I got pretty of being sick. So, I did things. Like these:

1) Listened over and over again to the theme music of Harry potter and The Chronicles of Narnia. Yes. Over and over and over and I’m still listening. It makes me a bit sad (and excited, in a twisted way) that Deathly Hallows 2 will be out this year and that’s it, no more HP movies and I’m so gonna miss

About Narnia, I hear the next movie will be based on the first book, ie, The Magician’s Nephew, which I’ve read and I know doesn’t feature any of the Pevensie siblings and I’m gonna miss them.

On the bright side, it’ll still be Narnia, and hopefully, there will be more movies. And the soundtrack for both these series? So uplifting. Makes you believe there’s an unicorn right outside your door. Or better, a Narnian Prince ready to sweep you off to Hogwarts!

2) Watched all (that have been aired) of The Vampire Diaries (Season 2) episodes successively. What can I say? that’s seriously, the best show ever. I’m obsessed. And it worked on some positives as well. It brought back my paranormal love in a rush. Yes, paranormal/urban fantasy and I had a long affair, but then we had to break up, cos we (rather I) got bored of the same-ness I saw in most f the books. But. Big ‘BUT’ here. We’re gonna give our relationship another try, cos I’ve realised, I’m in a way, still in love with it.

3) Reading. My current shelf has been influenced by the good things VD’s done. So what am I reading right now? Maggie Stiefvater’s Ballad. And it is absolute gorgeousness. You should go here and listen to the music titled ‘Nuala’. Seriously.

4) Brainstorming a Shiny New Idea. If anything  comes off it, I’ll include you in the bigger story. Wish me luck that the Muse plays no more tricks on me.

5) Bloghopping. Yes, I’m keeping an eye out for all of you. Seeing what you all are up to. Hope all’s good.

So, your turn. What do you do when you’re sick? 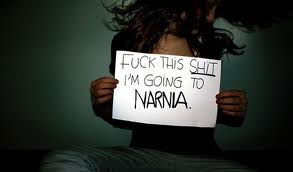 17 thoughts on “The Sick Handbook”