Nicola Lancaster is spending the summer at the Siegel Institute Summer Program for Gifted Youth-a hothouse of smart, articulate, intense teenagers, living like college students for eight weeks. Nic’s had theater friends and orchestra friends, but never just friend friends. And she’s certainly never had a relationship. But on the very first day, she falls in with Katrina the Computer Girl, Isaac the West Coast Nice-Guy-Despite-Himself, Kevin the Inarticulate Composer…and Battle. Battle Hall Davies is a beautiful blonde dancer from North Carolina. She’s everything Nic isn’t. Soon the two are friends-and then, startlingly, more than friends. What do you do when you think you’re attracted to guys, and then you meet a girl who steals your heart? 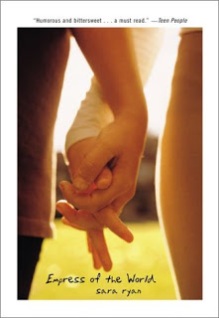 With a summary that ends with a last line like that, how can you not pick up Empress Of The World? I’ve always been curious about the book that has a seemingly hetrosexual girl suddenly falling for a girl. You don’t get to see many of those, because, sadly, not very many authors like experimenting with the protagonist’s sexuality in mainstream YA. Such books get marginalised into the sub-genre of LGBT fiction, out of the general reading public.
That is just plain unfortunate.
Because books like these are little gems. Yes, the initial chapters felt a bit wobbly to me, with being introduced to many different characters at one go, but Sara Ryan does a fine job of telling the story of a different kind of first love, friendships lost and won at summer program, much like a summer camp, except with academics.

The cast of characters were quirky, and I loved them all because they were so well fleshed out in such a short span of time. I could guess who was saying what without looking at the dialogue tags. The friends-circle of the bohemian, serial-smoker, computer nerd Katrina, the good guy with political aspirations Isaac and the perpetually soporific music-composer-with-sunscreen Kevin, make up a wonderful supporting cast. They reminded me of the circle of friends in Anna And The French Kiss in many ways.

Anthropologist-in-the-making, Nic has a funny, observant eye and she’s the kind of character who makes you wish you were friends with her. Sara Ryan blesses her with a great sense of humour, and oh, I absolutely adored her!
As for the love interest, Battle – well, her characterization is vague. There’s a lot more to her than meets the eye. And I guess, a lot more about her is revealed in next book, Rules of The Heart, which is being called ‘a book about Battle’. I just wish she wasn’t so much of a mystery throughout the book. I’d liked to have known her more.
And the romance between the two? It played out like a real teen relationship. From friendship, to more to complications and much more, the depiction was perfect.For me, the exploration of the relation between the two more than made up for Battle’s vagueness of character.

Nevertheless, Sara Ryan must be commended for the ending she drew out. It was the best kind of ending Nic and Battle could have had. She kept to the realism of it with a sweetness and nostalgia that was quite fitting.

Set against the unique background of a Summer Program for teens at a college, Sara Ryan’s Empress Of The World is an intelligently written summer romance that redefines labels (Nic has a tendency to label everyting, even herself) with  its light-heartedness and humour, and should be worth a read 🙂

What’s the best book with LGBT characters that you’ve read? Any that you would suggest I read?

6 thoughts on “Championing Contemporary YA: Empress Of The World”

Hello, hello! It is the big day of love and what better time to talk about your favorite romance reads of all time than today?! 💞
~ it has been a while ~
#qotd: where do you like to read?
#qotd ✨